Four out of 10 RV enthusiasts report leaks in roofs

EDMONDS, Wash., Sept. 26, 2012 -- There are a lot of leaky roofs on the RVs of America according to last weekend's reader survey at RVtravel.com. Of the more than 1,600 RVers who responded, about 43 percent reported their RV's roof had leaked, 20 percent more than once.

"I'm not sure these people know how serious this can be," said RVtravel.com editor Chuck Woodbury." The cost to repair the damage can easily run into thousands of dollars."

Gary Bunzer, better known as the RV Doctor (RVdoctor.com), knows full well what it means. "A 43 percent leak rate doesn’t surprise me," he said, "and that just reflects the RVers who actually know they had a leak!

"Lack of maintenance is the main cause of roof leaks on RVs and because the roof is 'out of sight, out of mind,' many RVers never think about the importance of regular roof inspections and maintenance. The racking and twisting an RV goes through while driving down the road, the various temperature and weather extremes we travel in, the deterioration of sealants over time, the lack of a roof ladder or a method of getting up there, all contribute to an inevitable water intrusion event. Left unattended, it will only worsen."

Bunzer said that by the time an RVer sees a stain on the ceiling, damage may have already occurred. "Water intrusion, in my estimation, is the number one cause of RV structural damage, leading to expensive repair and restoration. The proactive RVer will subject the roof and all the attachments up there, to a detailed inspection at least once per camping season. Early detection and a little maintenance, using the correct products, will guarantee every RVer a leak-free roof. It’s been an on-going training effort of mine for many years."

The up-to-the-minute results of the survey can be found at the RVtravel.com website. 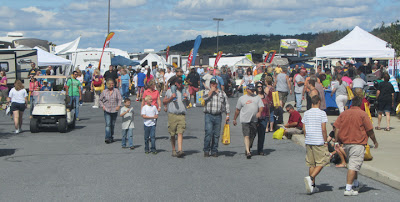 “We couldn’t be more pleased with the increase in both show space and attendance,” said Rebecca Lenington, Executive Vice-President of the Pennsylvania RV and Camping Association (PRVCA). “We sold out of booth vendor space inside the Giant Center and extended the manufacturer space further into the parking area.”

The first two days of the six day show were open only to members of the RV industry, allowing dealers one-on-one time with manufacturers and the opportunity for a sneak peek at their 2013 products.

The 2013 show will be held on September 9 to 15. For more information visit LargestRVshow.com.

SOURCE: RVtravel.com and LargestRVshow.com news release.
Posted by RVer at 8:07 AM No comments:

FOREST CITY, IA, -- Winnebago Industries, Inc., has re-introduced its iconic Winnebago Minnie Winnie with an emphasis on value on the once highly popular Class C motorhome. The targeted MSRP on the 2014 model starts at about $60,000.

The Minnie Winnie is debuting with the 31K at Winnebago Industries Dealer Open House event this week in Elkhart, Indiana. Its floor four floorplans range from 25 to 31 feet. The longest offers a large u-shaped dinette, full-featured galley, a 32-inch LCD TV, flexible sleeping options and ample storage including a large rear trunk.

The product will also be available in the new Itasca Spirit line according to Scott Degnan, Winnebago Industries’ vice president of sales and product management. “The new 31K Minnie Winnie and Spirit are value-packed and perfect for entry-level buyers or for rental applications," he said.

“It’s great to see it back on a product that looks great, even better than I expected at this price point,” said Steve Jung of Cincinnati's Colerain RV.

Winnebago Industries, Inc., is a leading U.S. manufacturer of recreation vehicles, which are used primarily in leisure travel and outdoor recreation activities. The company and its subsidiary build motorhomes, travel trailers and fifth wheel products under the Winnebago, Itasca, Era and SunnyBrook brand names. 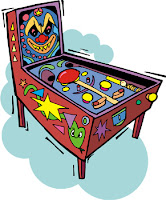 The RV park game room is headed the way of the dinosaur according to a weekend survey by RVtravel.com.

"Only three percent of the more than 1,500 readers who responded were interested in a game room," said RVtravel.com editor Chuck Woodbury. "Seventy percent said it was not important to them in choosing one park over another, and 27 percent said they would "rather a park did not have one."

"We are amply entertained with our computers and our Kindles if it comes to indoor fun," one reader commented.

"To be fair, most of our readers tend to be older, avid RVers and not young families," so that partially explains the high negative results," said Woodbury. "Still, RV park owners tell me that RVers and their children are bringing their games with them now on their computers and mobile devices and don't need to visit a game room. KOA does not even require its new franchise owners to have one."

The up-to-the-minute results of the survey can be viewed here.

Where to look for fall colors

Leaf peepers--it's time. The Forest Service is doing its part on behalf of Uncle Sam to make your peeping mileage productive. To that end, the spokes-folk for the Service had this to say: "Autumn is a wonderful time of the year to plan a trip to see the beauty of your national forests," said Tom Tidwell, Chief of the U.S. Forest Service. "As tree experts, we have incredible resources on our website to help you plan a great adventure this fall season."

What sort of resources? The Forest Service’s Fall Colors 2012 website includes clickable maps that link to forest-by-forest fall color information and to state tourism and fall color websites. Some of our most popular family friendly features include locations of scenic drives and trails, coloring pages for kids, the science behind the season, and links to a tree database. Photographs from visitors nationwide will be added to the site.

If you're away from the Internet, you can make a phone call to the Fall Colors Hotline at 1-800-354-4595. The hotline provides audio updates on the best places, dates and routes to take for peak viewing of fall colors on national forests.

Stock up the RV refrigerator, get plenty of batteries for the digital camera and make this a memorable autumn.
Posted by RVer at 2:01 PM No comments: 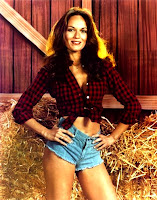 It's a long way from Hazzard County to Birmingham, but Bo and Luke's cute cousin, Daisy Duke, is taking her stardom to the RV world. Come October 16, actress Catherine Bach who made "Daisy Dukes" synonymous with severely short-cut blue jeans appears at the opener of The Motorhome and Caravan Club 2012 in England.

Known for fast car chases in a Plymouth Road Runner, Bach traded in her southern-tried four wheelers for a motorhome or "caravan" leaving the "Dukes of Hazzard" fame, now acting on a regular soap, "The Young and the Restless." She's taking a quick break from her American television filming to make the appearance at the RV show.

As Daisy Duke, Bach had the distinction of  having her legs insured for a cool million dollars. At age 58 Bach still has the ability to turn a head or two. Perhaps male British "caravaners" should be advised not to get their knickers in a knot: Catherine Bach is the mother of two and happily married.
Posted by RVer at 11:08 AM No comments:

"We are still refining the format, but our plan now is for one brief lead article each issue with advice that will enhance an RVer's experience, whether it's about lifestyle, maintenance, safety, towing or anything else about RVing," said Woodbury. "In addition, we'll embed one 60- to 90-second video tip in each issue from an RV expert. We already have two month's worth ready to go that we videotaped at the recent FMCA rally in Indianapolis and we'll be adding new ones this week at the RV show in Hershey.

"We're looking for other video submissions from people in the RV industry who have something of value to say to our readers," he said. "There's no charge for appearing in the videos unless we have to travel to record them. I expect that each one, depending on its topic, will eventually receive 10,000 to 50,000 views through its archives on several websites and blogs, so it would be good exposure for a company." The RVtravel.com YouTube channel, where the videos will be hosted, has garnered 1.7 million views to date.

The free newsletter will debut with about 6,000 daily subscribers. "We've solicited sign ups in our RVtravel.com newsletter and Facebook page for a couple of months now," said Woodbury. "But once the new newsletter is underway we'll push harder and I expect it to grow fast."

RV Daily Tips will be supported by advertising and from sales at RVtravel.com's e-commerce site RVbookstore.com. More information is available from Woodbury at Chuck@RVtravel.com.